Very little is known about Titus Lucretius Carus except as an author of a single work, a poem on Epicureanism.  Nothing is mentioned of his birth, life, or death. Attestations about his life are late. From Jerome and Donatus, Lucretius appears to have been born around 100 BCE and died around 55 BCE, although the death date is thought to originate from a letter of Cicero, dated 54, in which he has read the De Natura Deorum. It is quite possible that Lucretius lived afterward, perhaps even to the dictatorship of Julius Caesar if a) the reference to Venus as the begetter of Romans in the proem to his De Rerum Natura is a reference to Caesar, and b) the proem was revised after publication (not at all an impossibility). 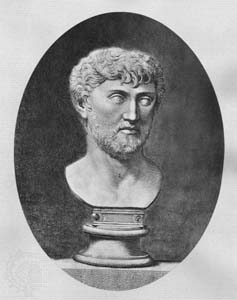 Engraving of a bust of Lucretius

His sole work, the De Rerum Natura, is dedicated to Gaius Memmius, the same who took Catullus with him to Bithynia and to whom Cicero wrote asking not to tear down the ruins of Epicurus’ house on land he owned in Athens. This action would have likely sparked outrage to Epicureans, who revered him as a saintly prophet, and therefore it is possible that the dedication to Memmius was related in some way to his ownership of the property.

The De Rerum Natura is a didactic poem in hexameters and divided into six books, and is considered to be the greatest exposition of Epicurean philosophy in Latin. Lucretius begins with an account of the atomic theory of Democritus and the nature of the cosmos.

Lucretius then moves into the nature of man and the mind. In the third book, the middle of the poem, he discusses death and the mortality of the soul, in what is seen as an homage to the underworld scene found in the same place in other epics (chiefly Odyssey 12 and Aeneid 6). He then discusses the “images” of things—that which is projected from an object either as a dream or as an actual vision.

The fifth book is an explanation of how the world came into being: the earth and the heavens, and the origin of man and civilization, all of which, Lucretius explains, is a process of natural laws, not any divine figure. The sixth and final book discusses natural phenomena and affirms the materialistic nature of the workings of the world, as opposed to the divine.

The very end, a description of plague, ends so abruptly that many think it is incomplete, though David Bright argues that the ending is intentional and modeled after Thucydides’ History of the Peloponnesian War, which also ended abruptly after he succumbed to the Athenian plague. The idea (reported first in Late Antiquity) that he committed suicide and thus never finished the poem was likely hypothesized to account for the seemingly incomplete state, rather than passing along actual information on Lucretius.

The purpose of the De Rerum Natura is to present Epicurean beliefs in a way which would please educated Romans. Although the work is dedicated to Gaius Memmius, it was intended for any Roman who did not already adhere to Epicureanism. In order to accomplish this, Lucretius had to soften the message a bit, sprinkling in myths in order to appeal to upper class sensibilities:

“But as physicians, when they seek to give
Young boys the nauseous wormwood, first do touch
The brim around the cup with the sweet juice
And yellow of the honey, in order that
The thoughtless age of boyhood be cajoled
As far as the lips, and meanwhile swallow down
The wormwood’s bitter draught, and, though befooled,
Be yet not merely duped, but rather thus
Grow strong again with recreated health.” (1.936-951)

Lucretius’ reception in antiquity appears sharply divided. No contemporary Epicureans seem to have mentioned him in their writings, and he is entirely absent from the Herculaneum fragments. However, he was well-received as a poet. Ovid, Vitruvius, Quintilian, and Statius all admire his poetical skill, and Nepos proclaimed him one of the greatest poets of all time. Despite showing disdain for Epicureanism in general, even Cicero speaks highly of his poem.