Vitruvius Pollio was a Roman architect active in the first century BCE.

Little is known about Vitruvius apart from what he says about himself in his writings. His praenomen is unknown, but his cognomen was attested by M. Cetius Faventinus, a late-third or early-fourth century author on architecture.

He fought as an artilleryman under Caesar, for which he received a public pension. Octavia, sister of emperor Augustus, apparently recommended that he continue receiving a pension, and thus used his spare money to write. Conte notes that it is probably not a coincidence that his work on architecture appeared during the time Augustus was engaged in massive public works.

Vitruvius’ only surviving work—and likely his only work—was the De Architectura in ten books. He begins, like many others in technical fields, by advocating for a liberal education (of the kind Cicero desired for orators in the De Oratore, or Quintilian in his Institutiones).

The rest of the book is outlined in a fairly straightforward manners.

Unfortunately, all the diagrams that accompanied the De Architectura have been lost in the manuscript process. 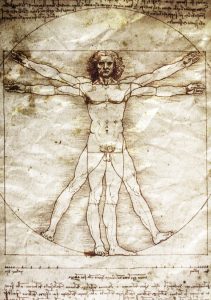 A reproduction of Leonardo da Vinci’s drawing of The Vitruvian Man from iStockphoto.com, courtesy of NPR.

Vitruvius’ impact was strongest during the Renaissance when Europe was rediscovering the lost art of Roman science. Vitruvius’ discussion on the human body and proportionality led to Leonardo da Vinci’s (and others’) “Vitruvian Man,” the figure of which remains popular today.